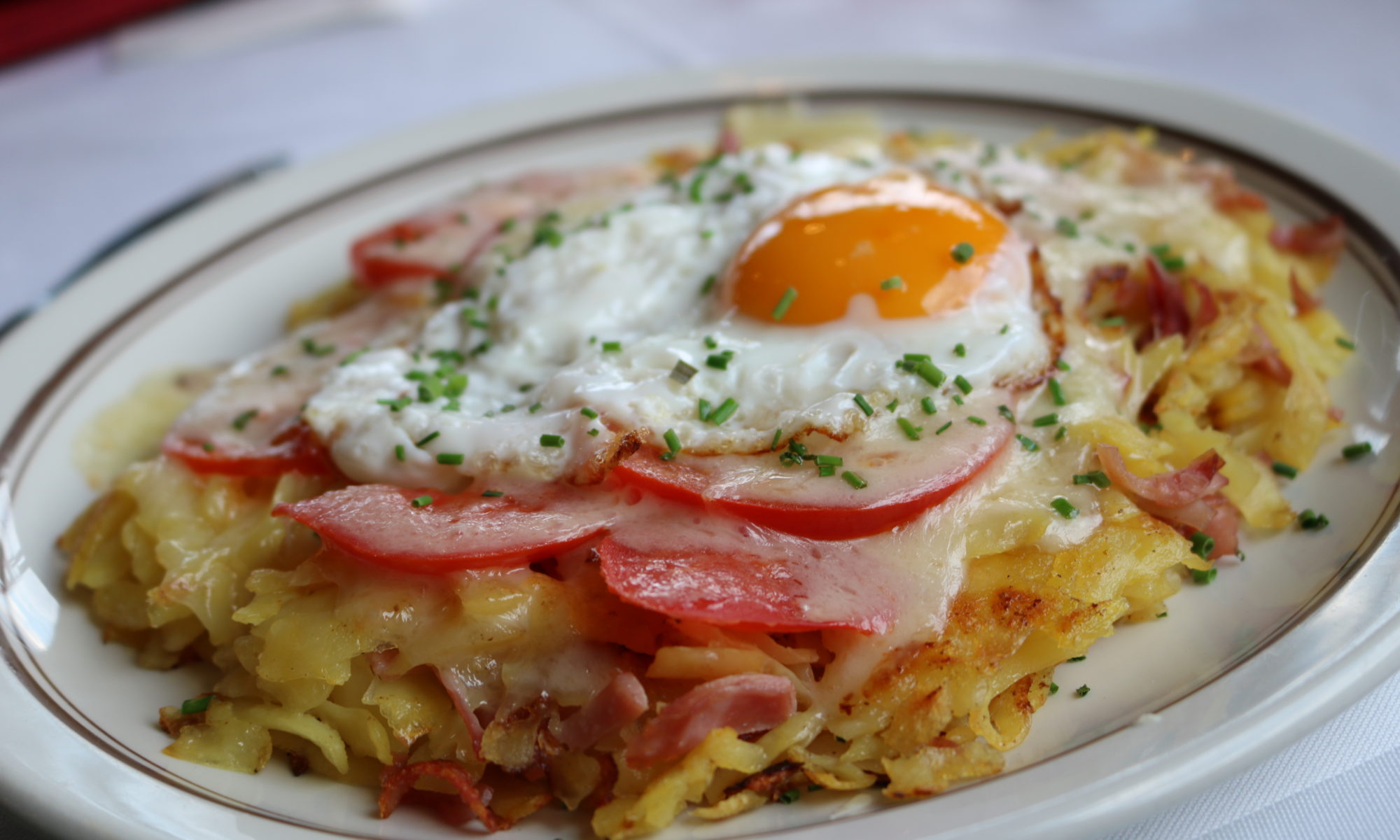 YOU CAN’T BEAT A CLASSIC  RÖSTI

Last year, hoping to save a few bucks, I stayed at the Hotel and Restaurant Emshorn while doing luggage transfers along the Chamonix to Zermatt Haute Route in Gruben. You’d better believe I found my way back there this year. It’s not a four-star hotel, but the owners Franziska and Renata Bregy, two sisters, really put their hearts into the place and you can see their influence and that of their loved ones all around the hotel. Like most Swiss hotels, the Emshorn is family-owned, dating back to 1953. When you stay there, they really make you feel like family. Perhaps the hotel’s most notable feature is their Valais based cuisine.

The dish that really captured my attention at the Hotel Emshorn was the Rösti. This was the first place I encountered it, and I’ve since found many varieties. It’s a true mountain food, the kind that fills you to the brim. A close equivalent to Rösti is the American hash brown. The Bregy family recipe includes a cake of browned, shredded potatoes (the Rösti part) with cheese, bacon, tomatoes, and a sunny-side-up egg. This is the most common version of Rösti that you will find in Vallais. The ham and cheese are mixed in and cooked with the potatoes, while the tomatoes and egg are neatly arranged on top.

RÖSTI IS NO HORSEPLAY

Well, maybe a little bit, considering one variety of Rösti is served with horse stroganoff on the side. I had heard of horse being served at restaurants, but I thought it was a thing of the past. Imagine my surprise when the waitress at Restaurant Bären in Interlaken told me it was her favorite! When it arrived, I was surprised to see that the Rösti occupied one side of the plate, while the horse stroganoff occupied the other. A different set-up than the Vallais Rösti, but every bit as delicious. The horse meat was accompanied by sliced peppers, onions, and mushrooms, all sautéed in a sauce that makes my mouth water just thinking about it. The finishing touch was a spot of whipped cream,  and while the horse meat wasn’t quite as delicious as beef, it still hit the spot.

THE SWISS LOVE THEIR MUSHROOMS

It’s not surprising that another variety is served with mushrooms on top! At a restaurant in downtown Martigny, the Rösti was topped off with chanterelle mushrooms, sautéed with chopped chives. Whether you enjoy cheesy, saucy, or decadent, there’s a Rösti for you. In fact, each region in Switzerland has their own version. Although typically a Swiss-German food, it can be found in restaurants all over Switzerland. Sometimes restaurants even include non-traditional flavors that have become popular, like the ham and pineapple “Hawaii” combination.  Be sure to try your hand at this Swiss dish by checking out the recipe!

*clarified butter is beneficial for sauteing, because it gets hotter than normal butter. It can be made by heating normal butter and separating the clear yellow liquid from the chunks and cloudy parts.