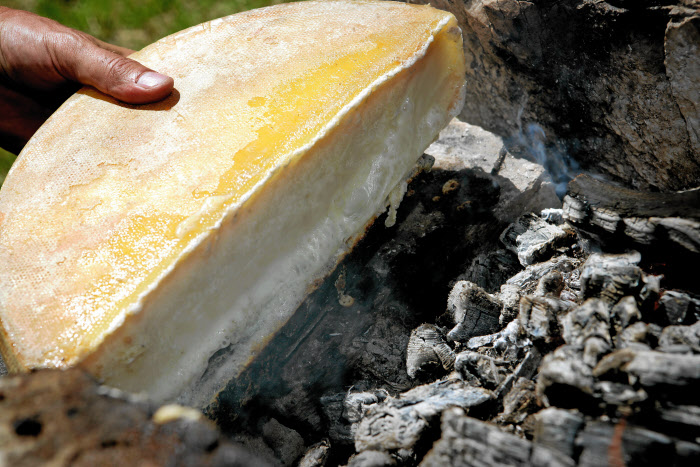 When I arrived in Switzerland I was told that I could not leave without tasting Raclette. I instantly was curious, how with such minimal ingredients this dish was such a success.

But once you have enjoyed raclette, you will never question how it has won a place in my heart. Until you have enjoyed the sensation of hot bubbling cheese over boiled potatoes, I am here to tell you you have not experienced the correct way to eat cheese.

The first time I had raclette was at a rustic restaurant at the top of a mountain in Glion, called “Le Coucou.”  My eyes took in the beauty of my surroundings, the contrast of blue skies and green mountains were breath taking. The beauty continued as you entered the restaurant. As I scanned the menu I found “La Raclette du Valais” and I had no need to look further.

The history of this dish is documented as far back as 1219. The story, that many historians believe, is that this dish was discovered by accident. Travelers would bring food with them, many times that included, bread or potatoes, and cheese. While building a fire they set the cheese a little too close to the heat, resulting in a delectable melted cheese. Through the years it began to be accompanied with pickled onions or pickles.

Raclette comes from the root word racler, which means to scrape. Once the cheese is melted and sometimes even close to caramelizing, it is scraped onto your choice of bread, potato, or vegetable. You can’t go wrong with the recipe that has been working for centuries.

Raclette cheese has a mild flavor and is a semi-hard cheese. But when it is melted, the cheese has an aroma that cannot be defined. The simplicity of this dish is overwhelmed by the flawless flavor that comes from this AOP and AOC cheese. There are many other ways that raclette is eaten, check out this appetizer.

Check out a list of all cheeses from Switzerland here.